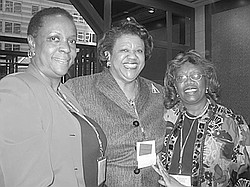 The theme for the event was “Protecting and Empowering Women and Girls Against Violence. DST was acknowledged as one of the first organizations to place domestic violence prevention at the top of its social action agenda.

Discussions centered around ways domestic violence is manifest, resources available, and the importance of keeping this issue at the forefront of legislative agendas.

Cynthia M.A. Butler-McIntyre, national president, received greetings from Marina A. Valere, ambassador and permanent representative of Trinidad and Tobago to the U.N.

Speakers included Ted Bunch, founder of A Call to Men, who spoke on the role of men in preventing domestic violence; Kate Weber, director of NGOs and U.S. Fund for UNICEF; June Zietlin, director of the committee on the elimination of discrimination against women; Judge Michael Cusick, New York assemblyman, who shared copies of legislation he has proposed to address teen dating violence and discussed an educational program to address the issue.

Also speaking were Quincy Lucas, founder of Witney’s Lights Inc.; Rosemonde Pierre-Louis, deputy president of the Borough of Manhattan and native Haitian, who presented an update on relief for Haiti.

The keynote speaker for the luncheon was Lynn Rosenthal, White House advisor on violence against women for President Barack Obama, who stressed the need for care packages and volunteer local shelters to provide medical help for women in the community, and the need to work with young women and involve men in prevention efforts.